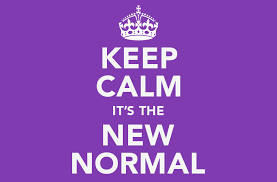 There are two kinds of new normal. There's the one that arrives in fanfare and is announced by everyone, often ushered in by a crisis; no one can miss this new normal. All eyes are fully open to the changes we must now get used to; perspex screens, masks and social distancing. There is another kind of new normal however that is much more subtle, it happens gradually over time like the boiling of a pot or the flavouring of a dinner. No one announces its arrival and once it's here no one really notices it as 'new' at all but only as what 'is' since we can't imagine or conceive of a world in which this normal doesn't exist.
These new normals are deadly and without canaries to warn us they'll end up killing us and dismantling our social structures.
This thought occurred to me recently when reading Glynn Harrison's excellent book 'A Better Story' in it he points to many of the effects of the Sexual Revolution on society. The promise of the revolution was 'better sex and more freedom' and whilst it has certainly made us more free (if freedom is taken to mean only the throwing off of restraints) it hasn't brought us much that is better. I have grown up in the post-revolution world and so have known nothing else but its dogmas.
It was only when a new friend I made several years ago commented with surprise at the amount of divorced or remarried couples he knew of in the church that I began to consider whether this normal wasn't always around; I had no idea that it was new at at all.
Here's some normals we're familiar with, normals that we might never have considered 'new' since no one announced them with the same fanfare we've become used to in the past few months:
I'm sure there are
Mental health disorders are treated by many as being as inevitable as the common cold or as genetically predisposed as cancer and yet there is plenty of evidence to suggest that for the most part (though of course not in every case) it is more a symptom of something else, resulting from other factors at work in a person's life.
Whereas in our current crisis we're going to great lengths to protect the elderly and vulnerable from Covid-19, many of the new normals listed above are simple accepted (or in some cases celebrated); and yet it is our young that are most at risk from them all.
"Family insecurity and insecurity are bad for kids in terms of almost any outcome that you care to mention" (Harrison) and whereas we all accepted that divorce would harm our kids (although in many cases even that is done 'for the sake of the kids') cohabitation (the new normal) poses a much greater threat to the stability and security of our kids:

In a study from the UK Marriage Foundation the author found that, independent of mothers’ age or education, more than half of couples who only get married after the birth of their first child have split up ten years later, compared with only one quarter or couples who marry before having children.’

This has huge knock on implications for the mental health of our young since (in one survey of 10,448 eleven year olds) 18% of those living in stepfamilies had significant mental health problems, compared to 6.6% of those living with both natural parents. Boys were affected most of all, displaying conduct problems, hyperactivity and attention-deficit issues.
There are two kinds of new normal, one that gets noticed as 'new' and one that gets accepted simply as what 'is', but if it hasn't always been this way shouldn't we be more concerned that it's new and start to question whether we're all happy with it?
Posted by Jez Field at 01:26 No comments:

Doing is believing: the real reason why Covid-19 presents the biggest threat to the church for a generation

'Seeing is believing' goes the adage, but I don't think it's true.

Anyone who says 'I'd believe if only I saw...' isn't to be believed; they understand neither themselves nor the nature of their beliefs.

At first seeing may well lead to believing but only until believing becomes unpopular (socially or personally) and then suddenly (as if by magic) our sight is called in for questioning; excuses are made and belief will slip out the back door of doubt claiming 'I lost faith.'

The question is, do we lose it or just stop it?

It's those two realities that underpin what I think is the greatest threat to the church for a generation.

The longer our churches are closed the longer our behaviour conforms to the patterns of our culture, and since our society has worked hard (and deliberately) to make secularism and atheism seem the more plausible, a prolonged swim in these waters without the rhythm, routine and re-education of Sunday mornings will make following Jesus appear less true, attractive and necessary.

That is to say nothing of what is actually true, but only what becomes true for us by the way we behave.

Another factor in this has been the effective diluting of our churches into social clubs and the appealing of our churches to consumer trends that has gone on over the past two decades. In the name of mission we have worked hard to serve people sound-bitey sermons and emotionally charged worship and even written daily devotionals for them to read - 'don't read the Bible yourself, just read what I got out of it when I read it.' we effectively say to them. We've done these things to such an extent that fewer Christians have substantial daily practises of their own to help draw them closer to God. The church has become so reliant on the professionals (the Free Church equivalent of the clergy) that we have created a lazy form of Christianity - and since we haven't spoken more attractively and intentionally about the beauty of Christian truth in the face of deliberate campaigns to undermine traditional Christian ethics, we have created an apologetic and limp-wristed church perhaps more dependent on Sundays to 'keep 'em coming back' than ever before.

When our church doors do open again I'm not saying that there'll be no one there to worship, but only wondering aloud what the long term effect this lockdown will have had on those who are there.

What we've done in the past three months has instilled beliefs (by way of our behaviour) that will now hold more plausibility (and therefore truth) than will Jesus' words and the historic rhythms of the church. We've clapped for the NHS, reinforcing the importance of public righteousness and centrality of our culture's cult of Health. We've talked incessantly about the strength of the economy, reinforcing the value of the office above the household, and those of us with children have talked often about how we 'can't wait to get the kids back to school' perhaps settling for good our desire to delegate away from parents the educating of our children - teach them whatever you want, just don't ask me to do your job!

Of course it hasn't all been doom and gloom; or has it?

Educating our churches to 'watch church from home' might be better than nothing, but only just. While it 'wins' in maintaining a routine that in turn helps play into Christianity's plausibility, it 'loses' by playing into consumerism and encouraging a 'take it or leave it' spirituality that is devoid of sacrifice, commitment and relationship. Some will contest that there's been plenty of positive pastoral and community oriented response - serving our neighbours, supporting those in need, delivering food etc. Whilst that has certainly been true, my concern is that too often this has been done by a committed core minority and not the majority, it's the same few faces on every Zoom call with whole households conspicuously absent from our lives. When churches do eventually come back together inevitably there'll be greater feelings of imposter syndrome among those who went underground and didn't engage in the community life. Retreating into our private households may have kept some us more physically healthy than the alternative but it has undone five year's hard work on the part of our churches to break the isolationist individualism that makes genuine church fellowship so hard. The default mode of our age is to embrace me over we, so without weekly routines that force me back into we we're allowed to indulge more in what is a much easier and more natural fit for us.

It seems to me that these things make up the real crisis affecting the church. Things have certainly changed, but not necessarily for the better. All we've done in the last few months will have changed for good what we believe, or maybe it will have just shown what was already there.