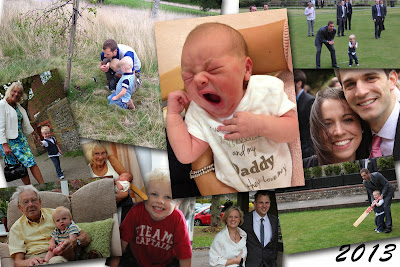 Every year on this day (the day of his funeral) I like to post some tribute to my dad who died of prostate cancer, not to be morbid or to make you sad but to celebrate his life and give thanks for the joy and love of life he gave me.

So much has gone on in three years, so many things have changed and new experiences been had. It seems so strange (though this isn't the right word) to think that my dad is no longer a living part of these changes and experiences. It all feels so, well... wrong. I can't find a better word to describe the feeling other than plain old wrong. 'Wrong' when said with some force, through gritted teeth (spoken from the gut with some gusto) goes some way to convey the feeling I mean. My mum and I were discussing only yesterday how this 'wrongness' really only produces unresolvable anger if we're not careful.

We all live, rather foolishly, not ever giving any thought to the eventuality (and inevitability) of our death and for many of us when it does interrupt our lives (through the death of a loved one or some bad medical report report) it leaves us spinning and confused, angry and bitter. The truth is, and this thought has given me much comfort, that whenever my dad would have died whether now or in 40 years time I still would have felt some level of 'wrongness' and anger toward the event. Death, we feel, ought not to be part of life, it is an impostor a crasher of life's party.

It's wrong that he's gone, because I'm still here and I always expected that while I lived and learnt he would be there to guide and teach. I never thought that the one who taught me to ride a bike wouldn't be there to go riding with. I never really thought that life would tick by just fine without him. The sun still rises and sets each day and he's not here to enjoy it and that all feels so, well... wrong.

It's wrong that he's gone, because I wanted him to watch me win the cup final. I find it strange that given our own mortality we often live our lives stacking up experience after experience and achievement after achievement without giving too much thought to where it all leads, what all our achievements achieve. It leads, of course, to an enlightened and accomplished fully rounded version of ourselves; but then what's the point of 'rounding' if there's no one there to behold the spectacle? Dad not being here to witness the 'flowering' (or perhaps 'coming of age' is a more masculine phrase) of all of my and our achievements and developments feels so, well... wrong. Who will I send the photos of my shoddy DIY to now?

It's wrong that he's gone because he loved life and worked hard in order to enjoy the 'vintage' years. He had sowed into many things and people over many years and he doesn't now get to reap the fruit of it all: The lowering of a golf handicap, the arrival of a grandchild or two or three, going on that world cruise, enjoying being debt free post mortgage, taking up that hobby, discovering that hidden trail through the woods. That a man would work for 35 years and not reap the fruit of his labours feels so, well... wrong.

There are many other things about his passing that seem 'wrong' to me but those three are the key ones for me at least. Three weeks ago my sister gave birth to a beautiful baby girl that he'll never meet, ten months ago Amy gave birth to our second son that he'll never meet, Stuart's looking to buy a house that he'll never help to decorate and mum has become an amazingly accomplished and resourceful woman who doesn't burn the dinner any more... a list like this will grow and grow as long as life goes on. Going over and over it all and marking down every event and moment that he'll never be part of is it seems a meaningless thing to do. It doesn't change things it doesn't bring him back, and so why do I do it? Why do we do it? Because it's wrong and recording it all ensures that complaints against the universe get recorded down. I/we feel not only the 'loss' of dad but the injustice of his dying as well. Blogging like this and making lists like that is my way of yelling at Death 'we will have justice! You have robbed of us of life and we will not let it go!'

'But then why do I feel like this?' I ask myself. Why do I make it about more than plain 'loss', why does it feel unjust when people die or don't get from life what I feel they deserve? How is it that we can use words like 'deserve' and 'unfair' at all when talking about a randomly assigned (and undeserved) lot in life? It feels as though feelings like this betray us slightly. They are all a bizarre throw back to a belief system I thought we'd thrown off years ago as a society. Unjust, unfair words that are 'just an expression' people might say, 'it is only sentiment and feeling, it doesn't point to anything larger at all' others might protest. Perhaps. Perhaps it is just the fused thinking of an overdeveloped brain caught between evolved ape and moral creature.

As a Christian however I would argue differently - but then we've come to expect that. I'd argue that our surprise over the wetness of water is an indication that we were destined for something other than life in a fish tank. That we were destined to a life on land. I would suggest that our disdain of death and our anger over the 'injustice' of it all is a signpost toward the truth that we were never meant to be 'ok' with it in the first place. This isn't how it was meant to be, there is hope; but then I'm not one to preach...

For this year's blog to commemorate the passing of my father I thought I'd post a list of things that remind us of him originally printed on the reverse of the order of service from his funeral. I hope in doing so it helps make vivid in our minds again the wonderful man that he was. Gone but not forgotten. Gone but not really gone. For me he's seen everyday in the mirror whenever I catch my reflection and recognised in the development of my boys, cricketers and explorers the both of them!


Cricket, the watching and the playing
Makeshift games and competitions (with a fully devised rule system)
Walks that include 'adventures off the beaten track'
Dining out and having to move table several times before being sufficiently satisifed that the table didn't wobble
Holidays in Italy
The Times Newspaper
Midweek football on TV and the oft quoted 'the best view in the stadium isn't in the stadium at all it's here on the sofa from my tele'
Paddington Bear for Becs
The Lord Mayor's show and other special events on TV we just 'had' to watch
Helping us with our homework
Planning school lessons with mum
Running junior squash teams
War films
Sea Kayaking
Chess and my much loved Skype games with him - he always won!
Watching us play sport
Easter hockey in Lowestof
Making Bird Boxes
The Archers
Classical music
Conn Iggulden books
A love of history
Nelson and Wellington
Films: Zulu & Waterloo
Cat Stevens
Blockbuster Epics on TV with the sub turned up so loud things fell over and broke
Telling us to 'sssh' during TV programmes
Always being ready on time
Bike rides
walks
walks
walks
Fairway_lad
Golf spreadsheets
His brown leather jacket
Cricket on the radio
Family meals
Taking Becky in 'small doses'
Calling rush hour congestion 'tea-time traffic'
An enquiring mind
A hunger for knowledge
Telling us 'time will heal' (I'm not sure he was right on that one though)

An amusing fact that Dad would have enjoyed was that he died on the anniversary of the Battle of Trafalgar - he always did love his history!

Beautifully written, love the memories recorded. A tear in my eye at your loss but also the beauty of life. And life to the full too.

When that day comes for me Jez, I hope and pray I can handle it like you. Awesome.

I really enjoyed reading that and remembering your Dad. It's funny because I played the pitch and putt in Southsea with Jess the other day and suddenly had a vivid memory of going there with you and Steve, watching him play cricket at the field next to it and then sneaking off to play some pitch n putt...good times! But it was on the anniversary day, so I had him in my thoughts too. A great man, never forgotten. Love to all Fields everywhere x